Hey gang! Some of you may have already seen the news on our social channels, but Comicazi won Best Comic Shop in Boston Magazine’s Best of 2017 poll! Winners were 100% selected by the community, so thank you so, SO much to everyone that voted for us. It means the world to us, honest.

Check out all of Boston Magazine’s Best of Boston 2017 winners here.

We were honored to be nominated alongside our friends from Comicopia, Hub Comics, and New England Comics. If you happen to spot a copy of the printed magazine in the wild please grab one for us so we can proudly display it in the shop! 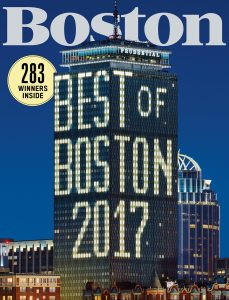 And as much as it’s a HUGE deal to win Best in Boston, wait ‘til you see the news below! 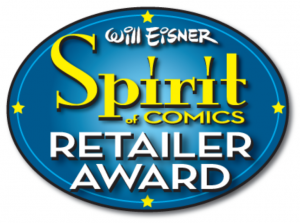 We’re one of 19 retailers nominated from all around the world, including comic shops from across the US, Canada, the UK, Australia, France, Israel, and Portugal. Only one shop in Massachusetts has ever won this award, so it’s an enormous honor to receive this kind of recognition.

Check out all 19 of the 2017 Eisner Spirit of Comics Award nominees here.

Sincerely, THANK YOU to everyone that has helped us earn this distinction. The accolades are nice, but we wouldn’t be here without all of you coming out and picking up your books, digging for that one old toy, or hanging out at our community events. Thank you again for helping make Comicazi awesome!

Click here to subscribe to the Comicazi email newsletter and get exclusive deals, weekly shipping lists, staff picks and more!